“2 Wichitans will Assist at Chicago” the small headline on page 6A of the Wichita Eagle reads. Three short paragraphs barely conceal the writers boredom in pointing out that two local ladies who work for Western Union will be helping out with teleprinters at the 1968 Democratic convention next week. We all know how boring that is going to be I can hear the writer thinking.

But I know something the writer does not. I can see the future. I know that the convention will  draw 10,000 anti-war protesters along with the delegates. I know that a fearful Mayor Daley will respond with 23,000 police and National guardsman. I know that by August 28, five days hence, protesters and police will be attacking each other in front of Chicago’s Hilton Hotel. Word will be that the violence began when police beat a young boy who lowered an American flag at a legal protest. Before the night is over, so much tear gas will be used that it will make its way into the hotel and bother the guests, and bystanders will be covered in mace. Inside the convention, reporters and delegates will be roughed up by police, including Dan Rather as he tries to give a report on national television. The famously calm and non-judgmental Walter Cronkite will say to him “we have a bunch of thugs here.” 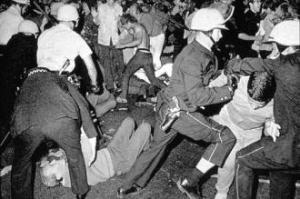 I know these things because I am reading this tiny story forty seven years after it was published. It has been hidden all this time, preserved to protect an old piece of china in a back closet of my mother’s home. As I touch the crinkly cream and grey parchment, I recall our old black and white television and the sound of Dan Rather yelling at the police to let him go. I become Sherri Roth, thirteen-year-old news freak and hopeful Lois Lane-style journalist, who lays awake at night searching for answers to life’s burning questions. I like Dan Rather and Walter Cronkite and I already have a soft soft for the earnest protestors trying to make a better world. I wish I could do something to help them.

I also know that Hubert Humphrey will get the nomination and lose the election, and the victor, Richard Nixon, will turn out to be a foul-mouthed, paranoid man who will leave the office six years later in disgrace, setting in motion events that will shape the 80’s, and 90’s and ultimately the world I live in.

But before that happens, eight protest leaders will be charged with conspiracy for the Chicago events and given unusually harsh sentences. Young rocker Graham Nash will try to help their cause by writing a song that asks opponents of the war “Won’t you please come to Chicago”. The song will hit number 35 in the charts, and remain a favorite for decades with its catchy tune.  Eventuality, it will be played on elevators and in dentists offices and no one will be bothered by the lyrics.

One of my favorite recent videos put to the original song is below.

I don’t know what sort of experience Wichitans Marvalee Shaw and Lawanda Lower had at the infamous 1968 Democratic Convention, or how they felt about the events afterward. Even with the internet of 2015, I can’t find out everything. I only know that Lawanda left this earth in 2013 at 76 years old. I don’t think she would have wanted to know that fact, as she set off at 31 for what must have been a big adventure in Chicago. It’s not always good to know the future.

Graham sang back then that the world is dying to get better. I guess it still is. One would  hope that after almost five decades, we have managed to bring a little more love into it.

For more notes from 47 years ago, where 13 year old Sherri Roth sees the news from the Friday August 23, 1968 Wichita Eagle, see my other blogs posts for the How to Get a Standing Ovation Edition, the Women’s Edition, the Race Relations Edition and the World Peace Edition.

5 thoughts on “What the hell happened in 1968? (Won’t you please come to Chicago Edition)”