Cinnamon on oranges and cumin on boiled eggs. The inside of a walled city so confusing that it has spawned an entire cottage industry devoted to directing lost tourists. Surfer towns painted in hippie colors and seaside resorts caught in a 50’s time warp as they offer hospitality to a smattering of elderly Europeans.

None of this is what I expected when I came to Morocco.

This is a blog about predicting the future, and over the past few days I’ve been thinking a lot about the unexpected. Three of us have just spent some time in Marrakech, and now as we leisurely make our way to Casablanca we have three nights to spend on the road. One of us wants to simply drive and stop when we feel like it, with no research ahead of time and no plans. Us other two have agreed. For me, planner that I am, this will be a true exercise in embracing the unexpected.

The first night we land in Agadir, the vacation spot for aging Anglos. Our adventurous non-planner has become ill, so he rests while two of us walk along a boardwalk under the watchful eye of an old but festively lit Ferris Wheel. We order pizza from a Lebanese restaurant on the beach. My vegetarian version is covered in eggplant and is some of the best pizza I have ever had.  Okay, I didn’t see that coming from Morocco. Back at the hotel, I go searching for something to calm the stomach of my sick friend. The kitchen staff barely understands me, but they insist I take plain rice and “water with gas” for him at no charge. They also insist that it will help, and it does.

The next day we move north along the coast, sticking to the small roads that keep us in view of the sea. The surfer town where we stop for lunch has people wearing clothes that fully expose their limbs. Something deep within me wants to stay longer in this part of Morocco, and live on the beach in a tent while I write deep brooding novels that I’m already sure will far exceed anything I’ve written yet. Okay, maybe someday I’ll come back and do that.

We’ve been advised to be off of the roads by nightfall, but as sunset approaches we are nowhere near a sizable enough town to have obvious lodging for strangers. Luckily one of us speaks some French, the second language of Morocco, and he is able to talk to a young man in the street who sends us to the town’s only open restaurant which also serves as an auberge. I didn’t know what an auberge was, but it turns out that this fairly common form of lodging is somewhere between a B&B and a hostel.

The young Moroccan working at the auberge is quick to offer us local beers. Fresh fish is a possibility for dinner, but when he has trouble communicating the kinds of fish that are available he simply brings me a bucket of everything that has been caught that day and asks me to pick one. Turns out I don’t know a sea bass from a grouper, so I point and hope for the best. We dine gazing at miles of desolate beautiful coastline with a sunset behind the mixture of cliffs and beaches that could fill dozens of different postcards and no two would look alike. My travel companions are generous and let me end up with the room that literally hangs out over the ocean, and I have one of my most memorable nights ever as I sleep to the sound of the sea.

Our last day takes us north into the greener, more populated and more industrial part of the coast. This time we turn to Lonely Planet for lodging ideas, and at sunset we find ourselves in a traditional Riad inside the town’s walled city but overlooking the lovely Oum Er-Rbia river (which translates as‎ “the mother of springtime”). I get the small bedroom with my own flower-covered terrace and consider what this sort of privacy and beauty would cost me for one night in the United States. I don’t think I could afford it.

I don’t often eat meat, especially when traveling, but for my last night in Morocco I opt for the adventure of a beef tagine, where the meat is steamed in a special clay pot to make it particularly tender. I’m hoping for couscous and vegetables with it and my French speaking fellow traveler tries to find out what else my tagine includes. He finally gives up. “I don’t know what they’re saying. It keeps sounding like prunes and that can’t be right.”

But it is.  I get the most tender beef brisket imaginable served with a mess of very tender stewed prunes on top. It’s delicious. Who would have guessed?

The next morning I get a final surprise as we try to do a little last minute shopping. We didn’t consider that the market in this town would not be like the markets of Marrakech but rather be a place where men and women buy small treats and cheap plastic items much like they would on a Saturday morning back home at Wal-Mart. Yes, there are more motor bikes than cars, more women wearing scarves loosely over their heads than not, and there is more fresh-picked produce and whole carcasses of animals than I am used to seeing ay my local supersaver, but otherwise this could be the small city I live near now or the Kansas town where I grew up.

Why in the world would you want to go to Morocco? I did get asked that question, and I understood it because I had heard about the pushy sales techniques in the markets and the difficulties for a female traveler in a Muslim country. 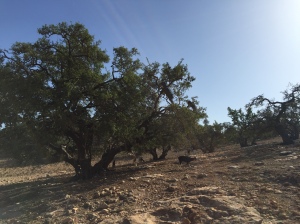 But I went to taste the fig jam and the mint tea. I went to discover the things I didn’t know, like how you can see a dozen or more goats in a tree, chomping on the argan fruits.  I went to see the amazing graffiti painted on the crumbling ruins along the coast, even if I didn’t know that was why I was going.

I went because I didn’t know what I would find.

(For more about my trip to Morocco see  Happy International Day of Peace Lahcen and Najet, I see ghosts, It’s an angry world in some places and My Way on my other blogs.)

7 thoughts on “That’s Why You Make the Trip”